Throughout history, gender roles have been clear-cut, women being subordinated to men. In the context of asylums, the situation was similar, as medicine was written and practised by men. Consequently, diagnoses were imposed on women. Furthermore, since Antiquity, hysteria has been labelled as a female condition, hystera in Ancient Greek meaning uterus. The belief in gender-specific debates had been going on for a long time; thus, at the beginning of the 20th century, the differentiation by gender in diagnoses was still in place.

A similar picture can be drawn from a series of case studies about the patients interned in the Maison the Santé at the beginning of the 20th century (1927). Women, here represented with the archetypical “Jenni”, were mainly being diagnosed with confusion, hysteria, mania, delirium, psychosis or degeneration. No reason could be found for these diagnoses: “As the historical records show, women’s experiences with madness and internment were much more complex and diverse” (PRESTWICH, p. 123). In the patients’ books, a listing of symptoms and diagnoses can be found, but the context in which these troubles appear is not mentioned.

In contrast, men (represented by the archetypical “Menni”) were mostly diagnosed as alcoholics, epileptics, or being affected by some form of mental debility. If a diagnosis like hysteria or degeneration was given to a man, it was mostly hand in hand with the diagnosis of alcoholism: “La proportion des cas de folie de cause alcoolique est presque partout en raison directe de la consommation des alcools d’industrie” (QUÉTEL, p. 269). Furthermore, by making an alcoholic patient stop drinking, most of the symptoms would likely disappear. In our case study, the patients that had the comment “healed” (guéri) in their files were alcoholics. Men could leave the hospital more easily, partly due to their diagnoses, but also because a man was not subordinated to anyone and could leave without family support. In our case study, we also found that 34.5% of patients were discharged in the first 3 months and that 63% out of these were men. In general, men were discharged earlier than women, as it can be visualized in the following table: 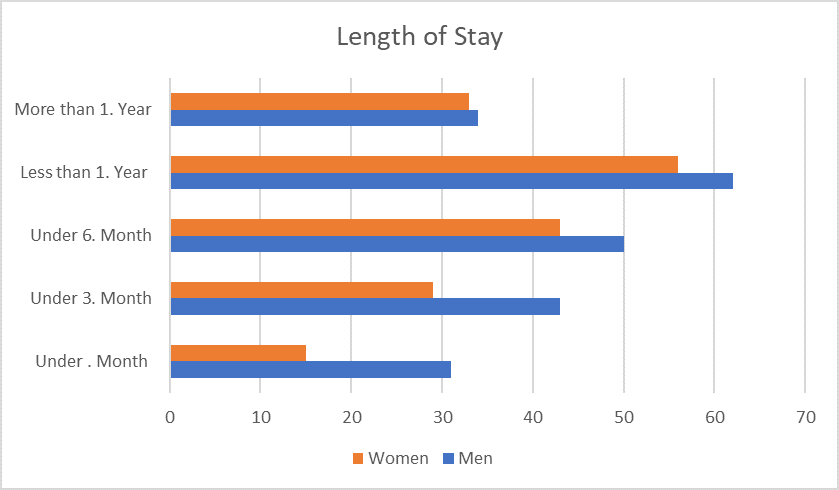 The analysis of patients in the Maison de Santé shows that gender roles not only defined how someone should have behaved in society but also showed how different genders were perceived during this period: In short, women were perceived as irrational and frail, whereas men, on the other hand, were defined as rational and strong.

This analysis is based on ALBERTY, Catherine, Case study: Gender differences in the maison de santé based on patient book from 1927, Travail de séminaire (MAHEC, course: Being Crazy in Luxembourg, lecturer: Benoît MAJERUS), Université du Luxembourg, 2017.