The cemetery represented the most physical aspect of death and the ideal subject for the Material Culture of death. But death goes far beyond the tangible. We do not solely erect graves as a physical display of a deceased person that was close to us, but it also serves the topic of remembrance. Remembering our dead is today probably the most common form of grief management, as we do not focus on their death, but remember their deeds in life. In the first semester, students were advised to go to a cemetery of their choice on All Saints’ Day and to do an anthropological observation of what they were witnessing. The results were discussed in class and further interviews were conducted by the students with their friends or relatives, concerning their thoughts about All Saints’ and remembrance in general. 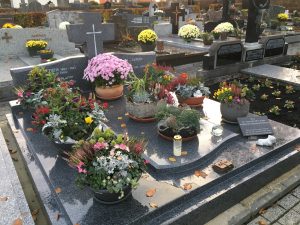 A richly decorated grave in Hachiville on All Saints’ Day

This culminated in a visit to the National Archives of Luxembourg and by having a look at archival sources concerning commemoration but also the material culture of death. For example, a funeral undertaker from Cologne inquired if German soldiers that fell on Luxembourgish territory during World War II could already be repatriated to Germany, as he had offered his services to families of fallen German soldiers.

From the second semester onwards, the students were tasked to examine different regional newspaper (from Luxembourg and the Greater Region) and to look out for articles on commemoration and remembrance on a daily base. This resulted in a considerable database, composed of the obituaries; necrologies of famous people (regional as well as international); policy debates on, for example, the incineration of bodies; articles commemorating tragic events from history; as well as advertising related to funeral undertakers or stonemasons.