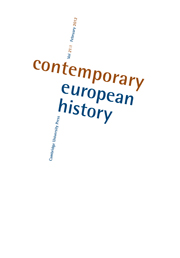 A new issue of  the Journal of Contemporary History (N°21) is now available and contains the following articles:

In Search of Meaning: Foreign Volunteers in the Croatian Armed Forces, 1991–95 by NIir Arielli

Foreign war volunteers are a recurring phenomenon in modern warfare. The Yugoslav Wars (1991–95) saw the participation of foreign fighters on all sides. The article focuses on foreigners who joined the Croatian armed forces (excluding returning Croatian émigrés). It examines where the volunteers came from, what brought them to the Balkans and how they represent and commemorate their wartime experiences. It argues that their participation in the conflict can be understood as part of an individual search for meaning, comradeship and empowerment.

On the eve of the Second World War Germany dominated the exports and imports of south-eastern Europe. Yet the institutions that supported Germany’s trade in the 1930s were formed during the previous decade. This article shows how one institution, the Leipzig trade fair, helped overcome many of the problems that had disrupted German commerce with Yugoslavia after the First World War. During a decade when German firms were only slowly returning to the region, the fair built an extensive trading network in south-eastern Europe that relayed economic news, found agents for German firms, and advertised for German products. By the 1930s the fair’s representatives had become the backbone of Germany’s trade network in south-eastern Europe.

Surviving in the Global Market: ‘Americanisation’ and the Relaunch of Italy’s Car Industry after the Second World War by Francesca Fauri

This contribution sheds light on the successful recovery strategies developed by the Italian car industry after the Second World War and in particular the ‘innovation through creative imitation policy’ that characterised its relationship with American producers. This policy was feasible because the Italian car sector, and Fiat in particular, was fairly well prepared to measure itself against the American model and aimed at technology-transfer-based Americanisation in order to make itself competitive in the global market. Mass production adapted to Italian plants and necessities, combined with Italian style and design, was seen as a path towards international relaunch. Fiat’s subsequent development of its own technological resources and innovation strategy enabled it to weather the ups and downs of its long-term business history. When in 2009 an alliance with Chrysler was signed, Fiat’s technological capabilities in the field of innovative ecological and fuel-saving technology and its long-standing attention to style and interior design were judged important inputs to help the American car-maker (and Fiat itself) to survive in the global market.

The political and strategic aspects of General de Gaulle’s policies, his grandeur rhetoric and his hostility to European integration have between them taken up the attention of historians. It has therefore been overlooked that the 1960s were a period of unprecedented mobilisation by the French state in the promotion of French exports. This policy is not only due to the history of commercial diplomacy. The senior civil servants in charge of this process were interested not only in selling but also in creating a fundamental change to the perception of France by those abroad. It was a keen fight, involving not only official and semi-official bodies, but also private enterprise, who together furthered the neo-corporatist programme of the French state.