This article is a composed work of all the ideas gathered in the course ‘WWI goes Twitter’ by the students of the Master in European Contemporary History at the University of Luxembourg about the Twitter account ‘@RealTimeWWII’.

Disclose history to a broader public. That’s what the Twitter account ‘@RealTimeWWII‘ is doing. Hundred thousands of followers confirm the success of the project. But hasn’t it really no limitations at all?

The mastermind behind the Twitter account ‘@RealTimeWWII’ is the Oxford graduate Alwyn Collinson. Collinson’s idea is quite simple. He’s using the micro blog Twitter to tell in real time, ‘live-tweeting’, day by day the history of the Second World War. One goal of Alwyn Collinson is not to educate the followers of ‘@RealTimeWWII’, but to get people interested in history and to show the impact of the war on ordinary actors. By this new approach Collinson moves away from the traditional storytelling of the Second War World, the ‘mass history’, like he calls it.

The focus of his tweets is rather on diaries and letters from eyewitnesses, state documents or speeches held by politicians of the time, like Adolf Hitler and Winston Churchill. Which represents often forgotten or even unknown facts about the war. The charm of ‘@RealTimeWWII’ is due to the variety of the topics, like mentioned before, but adding pictures of battlefields, personalities or important events. We should also mention that the tweets aren’t focused only on Europe, but show also what was going on elsewhere, like for example a tweet about Mahatma Gandhi on October 5th 1941, who calls the Indian population for pacific resistance against the British government fighting for democracy in Europe but repressing India in the same time.

Although Alwyn Collinson’s idea isn’t truly a revolutionary one, like the account of ‘@TWHistory’ with the telling of the battle of Waterloo and the battle of Gettysburg. Nevertheless livetweeting of historical events gained a new dimension with ‘@RealTimeWWII’.

The popularity of ‘@RealTimeWWII’ in numbers 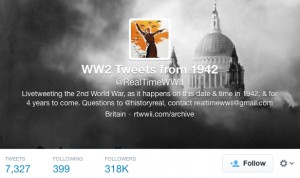 Collinson’s plan is to publish two to six tweets a day and till the present day over 7300 tweets have already been published. Also the number of followers shows us the success of ‘@RealTimeWWII’. In the first month after the creation of the account, ‘@RealTimeWWII’ had already 10.000 followers, by the end of November 2011 140.000 and till the present day over 318.000 followers.

The hip around ‘@RealTimeWWII’ has not only took by success the social network Twitter, showed by the translated versions of this account by voluntaries in some languages like Turkish, French, Arabic and Mandarin. But also due to the Facebook page Real Time World War II. Even if the Facebook page has only a little over 9.800 Likes, ‘@RealTimeWWII’ is represented on the two biggest social networks of our time.

Like every website, blog or social network, ‘@RealTimeWWII’ has his ups and downs, his pros and cons.  First of all we will start with the pros the account has to offer.

One of the biggest pros is of course the new approach of bringing the history of the Second World War to a huge crowd, academic and non-academic people, young and old followers. This by offering a multitude of subjects like economics, military and social, but also new views that are often forgotten over the time and moreover by the traditional historical narration.

Due to their size, the tweets can be seen as news flashes. The traditional 140 characters for a tweet, can be supported by pictures, videos and links.

The fact that like every other ordinary tweet, the tweets of ‘@RealTimeWWII’ also offer the possibility to be retweeted, makes it possible to reach people who aren’t even following the actual account. By adding a picture or a link to the tweet, followers are even free to give further information about the latest tweet.

Furthermore the tweets reflect a neutral position of the storytelling. There is no aim to be partial for one side or the other. Only the information counts.

After now showing some pros, let us be critical and poke around in an open wound. ‘@RealTimeWWII’ is far from being perfect.

Let’s start with Alwyn Collinson. Apart from knowing that the creator and author Alwyn Collinson (@HistoryReal) is from Great Britain, there are no further information. Only a quick web search allows us to enrich our knowledge about Mr. Collinson. By our research we’ve found out that Mr. Collinson is a marketing manager of an Oxford journal and that he’s doing all the work by himself. Although Collinson writes his tweets a few days before posting them with SocialOomph, a webservice which posts the tweets you have submitted earlier, by the time and date you’ve entered. Nevertheless it still remains a huge work to do. Posting two to six tweets, or even more every day, is a hell of a job and we are not talking about a period of weeks but years. Will Mr. Collinson be able to stay sharp or will ‘@RealTimeWWII’ disappear before the end of the Second World War?

Another question is where does Alwyn Collinson get all the informations? The first tweets were based on books and Google researches. After a while some followers started to add further informations, like articles from magazines, links to websites and blogs, etc. to his tweets. But what about now? Well now, we can speak about every academics’ and historians’ nightmare, which is: there are no source indications.

Even if the aim is to tell a global story of the Second World War, the main focus still remains on Europe. Of course we are now in November 1941 during the Nazi regime’s ‘Operation Barbarossa’ in the USSR territory. Thus the United States isn’t playing a big role until now, but will he really manage to represent the whole world via his tweets?

Our conclusion: a new way to educate

The idea of using Twitter to tell a particular episode of history, in this case the Second World War, isn’t new but still catchy. ‘@RealTimeWWII’ is a quick way to get the informations, informations often forgotten or lost by a huge number of people. The way of telling the Second World War is fun but still educative, even if this wasn’t the main goal of the project. ‘@RealTimeWWII’ clearly shows how social networks can be used in a scientific way.

The restricted size of the tweets can be seen as nor a good, nor a bad thing. Every user has to decide, on his or her own, what should or shouldn’t be mentioned with the next tweet. The same can be highlighted, regarding the fact that there are no sources indications.

Despite a few cons, ‘@RealTimeWWII’ has a lot to offer, which the number of followers shows and stands for his popularity.

The Second World War will continue for four more years and ‘@RealTimeWWII’ probably too. Let us see how both will end!