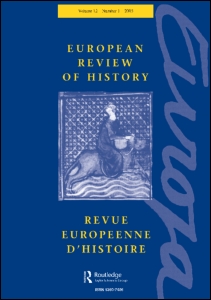 A new Issue of European Review of History: Revue europeenne d’histoire Volume 19 Issue 1, 2012 has been published and contains the following articles.

The Mediterranean has been a colonial sea since ancient times. While historians of the pre- and early modern world still tend to describe this region with the Braudelian paradigms of unity and continuity, the historiography of the modern Mediterranean suffers from the widespread fragmentation of national and regional studies, including important contributions on the colonial history of North Africa and the Middle East. In this context, the editors invited scholars to re-think the Mediterranean of the nineteenth and the first half of the twentieth century as a colonial and, most importantly, a colonised sea. Therefore the special issue brings together historians and geographers from North Africa, Europe and North America in order to reconstruct colonial interactions, relationships, entanglements and shared experiences between Europe, the Maghreb and the Middle East from late eighteenth century, when the European colonisation of the Mediterranean began, until the erosion of the imperial order in the 1950s.

The general belief of the world’: Barbary as genre and discourse in Mediterranean history

Europe re-invented North Africa as Barbary – at once a toponym and a trope – when this region became an extension of Ottoman imperial power following the Spanish Reconquista. Barbary emerged in modern Mediterranean history as a key genre and discourse which, in the record of Western perceptions of the Islamic world, constituted a link between the crusading mentality of the Middle Ages and the Orientalism and imperialism of the modern era. Barbary informed a Eurocentric view of relations between Europe and North Africa from the late fifteenth century until the nineteenth, consistently equating the Ottoman borderlands (the Regencies of Algiers, Tunis and Tripoli) and the Kingdom of Morocco, with barbarism, denying the history and indeed the very idea of Islamic civilisation, and furnishing the essential ideological argument for the colonisation of that region. Using Barbary as a contrasting foil to their emergent national identities, Europeans fixed the region as an unparalleled seat of piracy and slavery, and the unrelenting source of hostility towards Christendom and civilisation. The Barbary discourse conveyed a mental map of the Mediterranean sharply divided between civilisation and barbarism, between Good and Evil. Powerful in its sheer reductionism, it prevailed and persisted despite the more nuanced and complex realities of Mediterranean life and politics. Although concern with piracy and slavery became minor by the end of the seventeenth century, the discourse steadily intensified as a locus of imperial advocacy and rationalisation. When the central part of North Africa was carved out in 1830 to become an extension of France overseas, Barbary as a homogenising toponym no longer had a raison d’être, but the discourse lingered on as a trope in the new colonial context.

The Mediterranean, a territory between France and Colonial Algeria: imperial constructions

The geographical concept of the Mediterranean, born during the nineteenth century, has often been the object of scholarly attention. Many works have highlighted the progressive adjustments in the learned representations of this maritime space. From the Classical concept of a dividing border, which prevailed until the end of the eighteenth century, arose the idea of a junction sea, in the late nineteenth century. Though these studies all set the rise of the concept of a Mediterranean territory within the imperial context of the nineteenth century, such as the scientific and military explorations of Morea and Algeria, they do not explore the hypothesis that the Mediterranean was invented because it had become a colonial sea. Was the emergence of the Western Mediterranean, as an area of practices and representations, directly linked to the context of Algerian colonisation, to the chronology of its appropriation and to the evolution of French settlement on the banks of the Maghreb? This paper explores how, within the Franco-Algerian colonial situation, the Mediterranean was initially fashioned as a bridge between Europe and Africa, as a suture between the Orient and the Occident. The Mediterranean became a structuring feature of the French Empire.

Among the many problems posed by colonial citizenship laws regulating Algerians was the special case of people born within the confines of Algeria and their descendants who had emigrated outside of the country. Algerians in Algeria already inhabited an imprecise place of incomplete French citizenship. And those living abroad, the ‘Originaires d’Algérie’, had to contend with the decisions of French consular authorities, who laboured to interpret and implement the rules established by the Foreign Office and the Ministry of Justice to define the legal status of Algerians living abroad. The French state claimed this category of people as « French » according to the legal theory of State succession. Then, the Indigenat served as an Algerian nationality. This paper argues that this Algerian nationality was an imperial nationality for internal use.

Colonial migrants and the making of a British Mediterranean

This article examines the concept and colonial reality of the British Mediterranean through the imperial network of trade and migration from and to areas under British political and/or economic control. The hybrid identities of many citizens in the colonial Mediterranean can best be seen in the perception and reality of the ports of the Eastern Mediterranean as cosmopolitan. The article also argues that the role and experience of these migrants as intermediate groups was determined by the form of rule British colonial authorities imposed in each dominion.

Making a living in pre-colonial Tunisia: the sea, contraband and other illicit activities, c. 1830–81

Employing pre-colonial Tunisia as a site, this article investigates ways of ‘making a living’ in an age of migrations. It studies occupations linked to the sea, such as fishing or coastal trading, that integrated North Africa and the nearby islands into trans-Mediterranean and larger exchange systems. It argues that subsistence migration increased the volume of extra-legal transactions whose nodal points were the Tunis region, the Cap Bon, Bizerte, Algeria and nearby islands. Estimates of the trade’s volume or value, impossible to determine given the sources, are less important than charting dense flows of labour, goods, services and capital under-girding the political economy of contraband in relationship to labour migration. That the actors involved hailed from different religions, ethnic groups and classes renders this a perfect vantage point for probing inter-communal and intra-confessional relationships as well as the declining political fortunes of the Tunisian state.

This paper examines the relationships among salesclerks and other lower-level commercial and domestic employees in inter-war and post-Second World War urban Egypt, especially Cairo. It argues that the Italians, Greeks, local Jews, Armenians, Syrian Christians, Maltese, Coptic Christians and Muslims who often worked side by side on the floors of department stores and private homes participated in multiethnic occupational subgroups, formal unions and leisure cultures that created a series of networks linking lower-middle-class people in workplaces, public and neighbourhood space as well as commerce. These networks spanned ethnic, religious and linguistic boundaries, and they reveal a complex shared Mediterranean culture, underpinned by a juridical system shaped by European colonialism. Although historians have documented the vertical relations within ethnic groups and the horizontal relationships among the business elite of different communities, horizontal relationships among the lower and lower-middle classes of locally resident foreigners or Egyptians, who made up the bulk of the different communities, evidence both deep entanglement and regular conflict. The history of lived Mediterranean or cosmopolitan experiences thus challenges contemporary uses of both terms.

Connecting colonial seas: the ‘international colonisation’ of Port Said and the Suez Canal during and after the First World War

The Suez Canal played an essential role in transforming the Mediterranean into a colonial sea by changing its geopolitical features from a lake to a lane connecting faraway possessions of European empires more closely (at least geographically speaking) to the metropoles. At the same time the Suez Canal region itself was colonised in a very specific way, under British occupation on the one hand, yet carrying features of a ‘global locality’ on the other. Besides shedding light on the larger connections of the Suez Canal with the colonial world, this article attempts to understand the colonial situation of Port Said and the Canal, a place built from scratch in an effort to colonise (in the primary sense of the word) a part of the desert. Tracing Port Said and the Suez Canal Zone through different time periods – particularly during the First World War and the inter-war era – this paper tries to pin down the shifting meanings of ‘international’ and ‘colonial’ by highlighting the specificities of this ‘international colonisation’, regulated by agreements and treaties and marked by the influence of competing colonial powers

This article analyses the case of the Italian community in Tunisia during the nineteenth and twentieth centuries. The Italian presence in Tunisia dates back to the age of the so-called Repubbliche marinare (Maritime Republics), when Italy was still not a unitary entity, but rather a collection of states that had their own relationships with the Ottoman Empire. The Italian community in Tunisia is an example of a diaspora resulting from migrations in the Mediterranean region. The case study of the Italians in Tunisia is a sort of ‘diaspora from inside’. Indeed it is reductive to see Italians in Tunisia just as nationals, because they had different regional, religious, class and cultural backgrounds to native Tunisians. Local identities characterised their community. This perspective is also apparent in the multitude of mutual-aid associations and ethnic organisations. A heterogeneous group, including political refugees, emerged. Nonetheless, during the twentieth century the ‘defence of italianità’ reinforced the cohesion of the community itself. This paper places this group into the framework of Mediterranean Studies. It aims to understand the interaction between the Italian community in Tunisia and the native population. It follows philosopher Albert Memmi’s perspective on the unrelated relationship between the coloniser and the colonised. This relationship represented an interesting example of unusual tolerance thanks to a steady relationship between Italians and the Tunisian population, characterised by openness and profitable coexistence, even in the sphere of religion, which was not the case in other areas of Mediterranean sea.